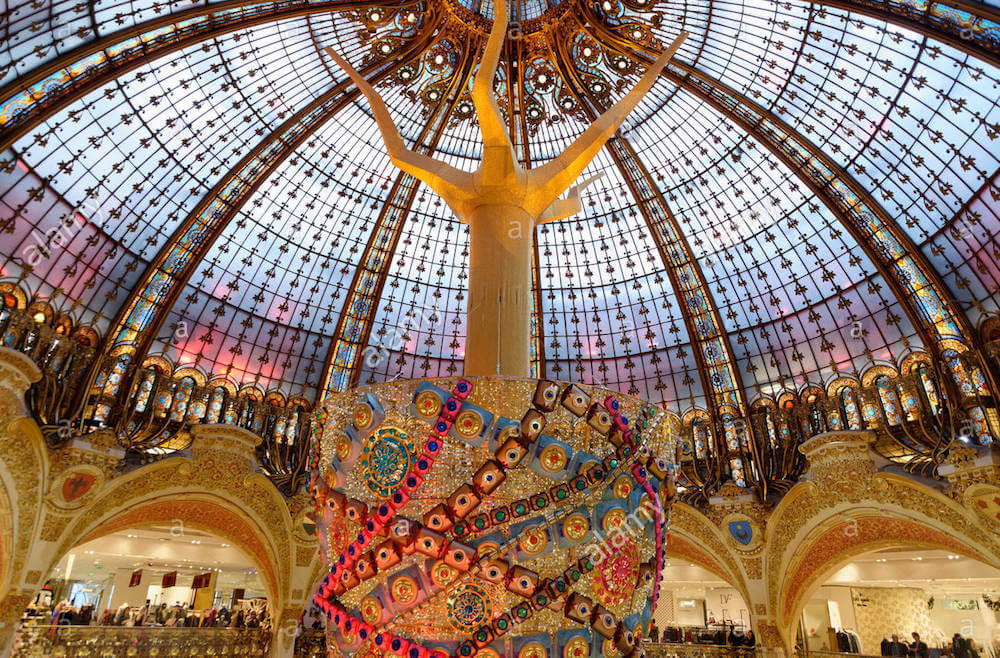 In a year that saw political and social norms dramatically upended, maybe it's only fitting that the most striking holiday decor trend of 2017 is the inverted Christmas tree. While it's worth noting that upside-down Christmas trees—or, for that matter, inverted icons of any sort—are not exactly an original creative concept, it's hard to argue with 2017 being the year in which this topsy turvey decorative curiousity became a full-fledged 'thing.'

Though jarring to traditionalists, inverted Christmas trees, it's argued, predate conventional indoor trees, their origins estimated to be sometime around the 15th Century in Eastern Europe—for reasons that appear to be as fuzzy around the edges as the origins of the Christmas tree tradition itself. Whatver the rationale for this inverted trend, modernists like us can always make an argument for calling conventional wisdom into question, and holiday decor is no exception. Here, a collection of some of the more beguiling examples of upturned Christmas tree installations—each of which imaginatively illlustrates why overturning esthetic norms can sometimes be a beautiful thing.

In a year that made the unaccepted acceptable, it may be only fitting that 2017's most striking holiday decor trend is the upside-down Christmas tree. 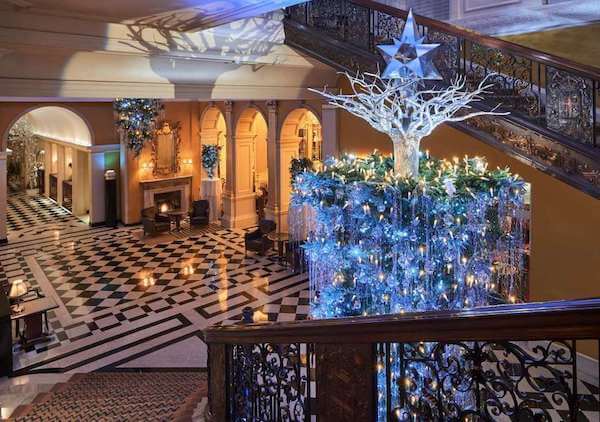 London's Claridge's took the inverted Christmas tree route—repeatedly— this year, decorating its lobby with a series of illuminated inverted trees, and offering a silver-bedecked tree designed by fashion icon Karl Lagerfeld (above and below) as its centerpiece. But for being suspended upside down, Lagerfeld's 16-foot spruce is fairly traditional, down to the mirrored star topper, which sits nestled amid the spruce's exposed roots. 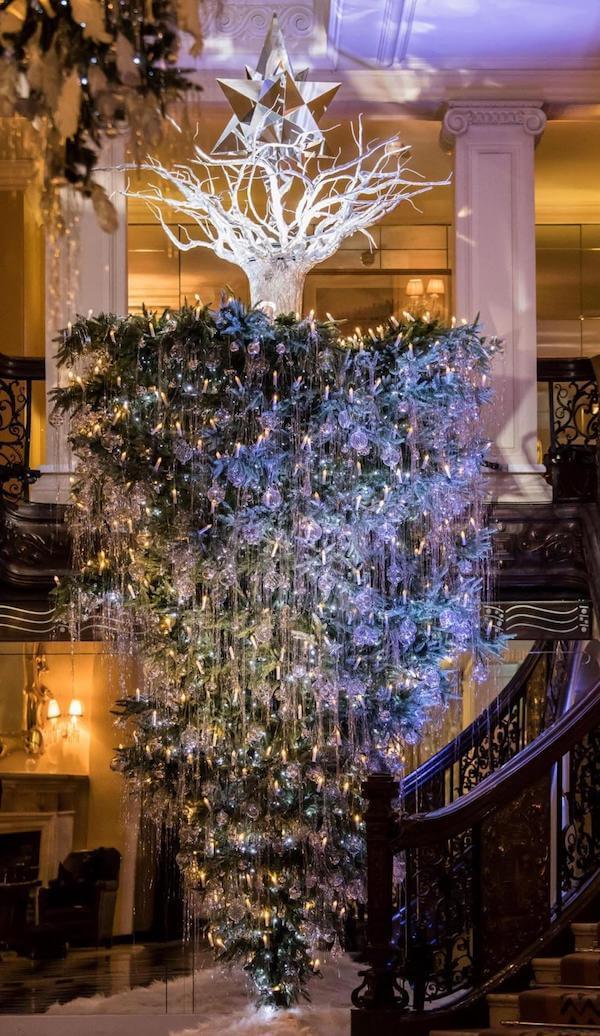 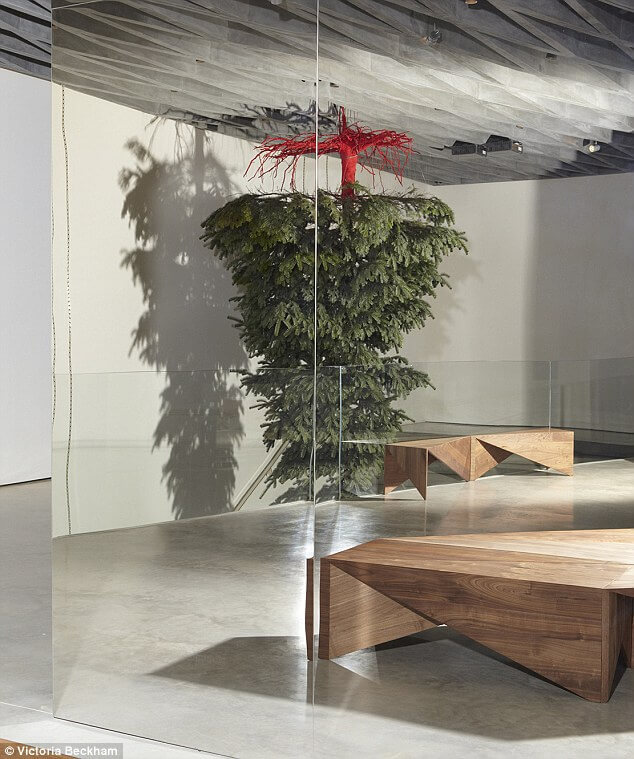 Arguably, the mother of the modern inverted Christmas tree is the Iranian-born artist Shirazeh Houshiary, whose 2 installations in the rotunda of London's Tate Britain—the first in 1992, the second in 2016 (below)—remain the most poetic Christmas tree installations of any kind. Both installations involved a massive inverted pine tree, suspended from the ceiling, unadorned, except for gleaming gold leaf roots.

In 2012, customers at Victoria Beckham's London clothing boutique (above), were greeted by a Houshiary-designed inverted pine tree installation, its roots painted bright red.

"I would like us to contemplate that the pine tree is one of the oldest species and recognise the roots are the source of its continued stability, nourishment and longevity," the artist explained. 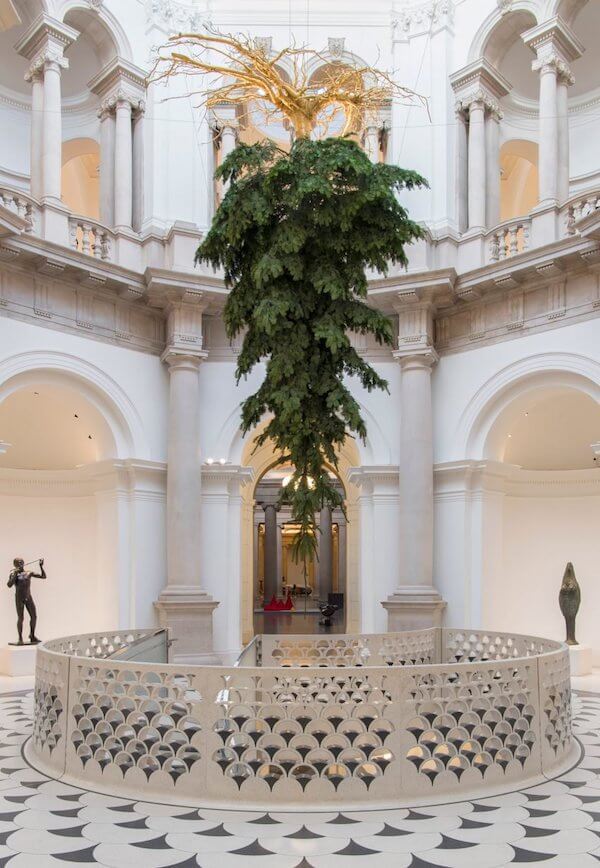 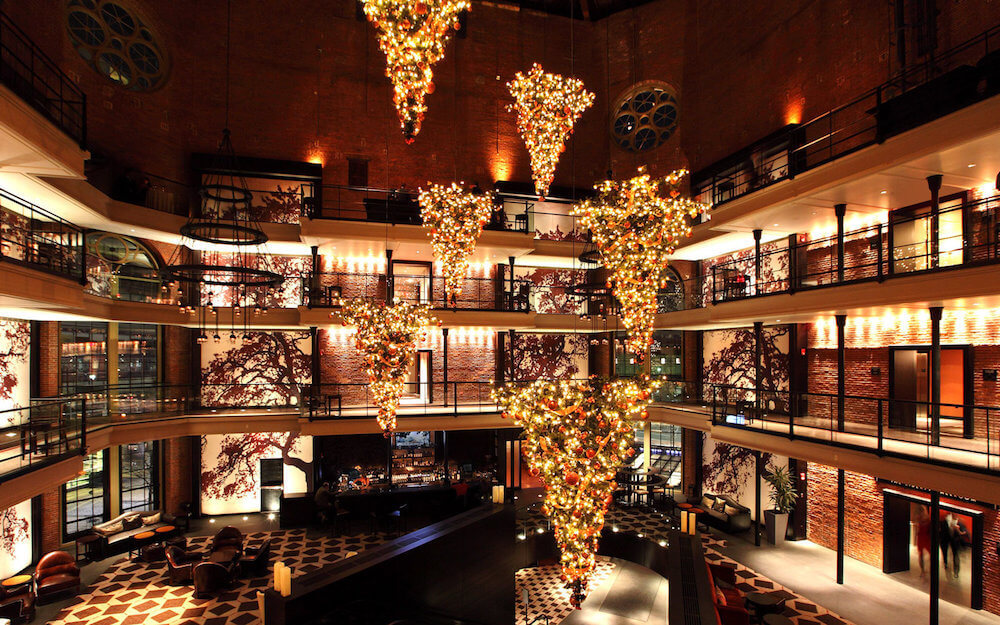 — Via The Liberty Hotel

Upside-down Christmas trees have become something of a tradition in Boston's Liberty Hotel, which has been installing a suite of inverted Christmas trees in its cavernous lobby for years. The initial installation of 9 foot tall trees, conceived by a local design firm, had the practical advantage of taking up no floor space, while providing a festive vantage point for the lobby's surrounding, multi-level catwalks. The fully decorated and illuminated installation proved popular enough to warrant a reprisal every year since its first unveiling in 2009. 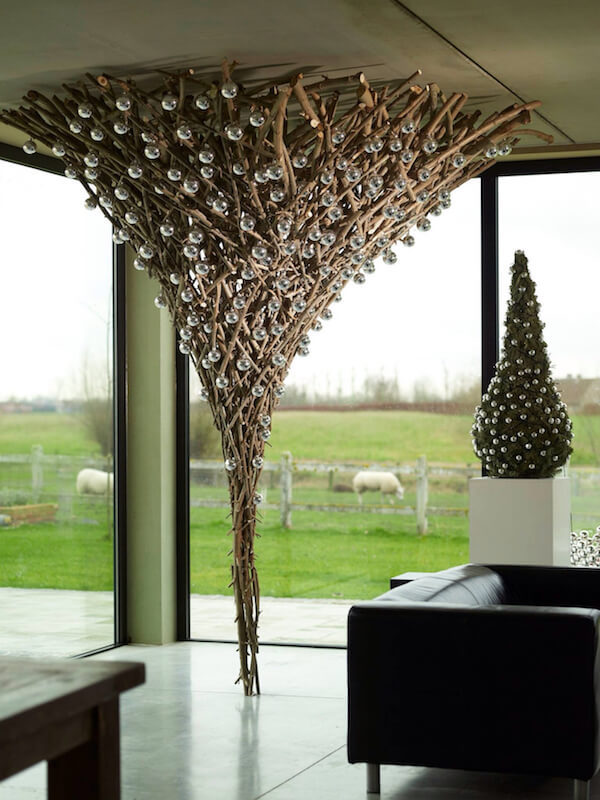 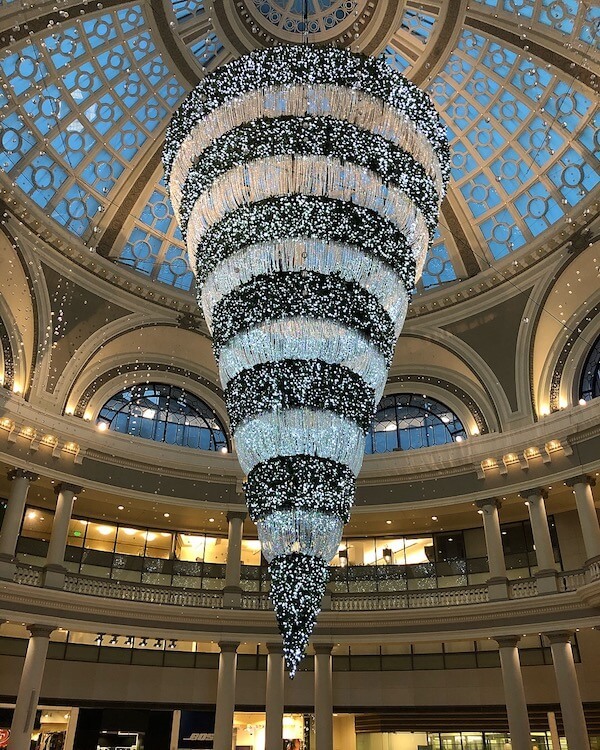 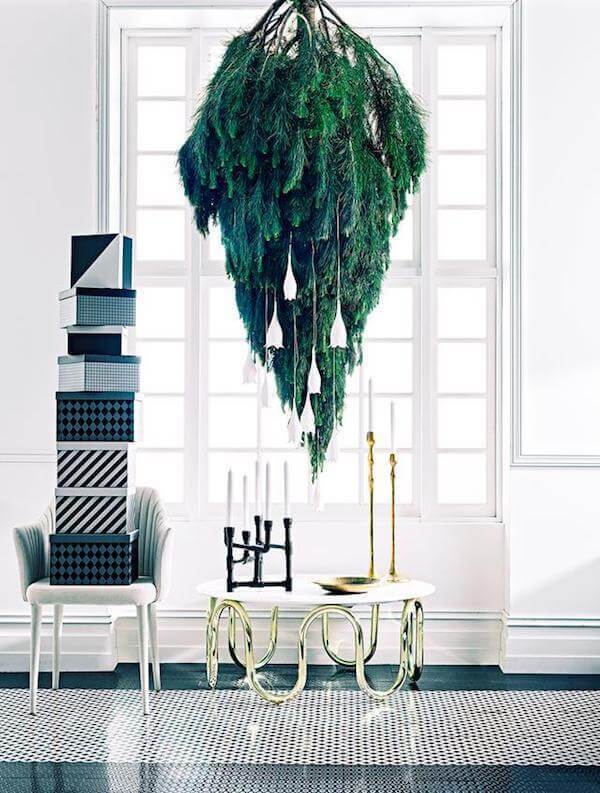 Inverted Christmas trees may benefit dramatically from being massively sized and installed in cavernous spaces, but adventurous holiday decorators have found ways to incorporate upside-down trees into the domestic environment, too. A sculptural version, comprised of bare branches makes a striking contemporary statement (top, left), while a small upturned pine dangles blisslfully above a coffee table (above).

In the right context, an inverted Christmas tree may invoke the look and feel of a glittering light fixture, or—and here's an ironic twist—a dangling, sparkling holiday ornament.

Calling it the world's most Instagrammable Christmas tree, San Francisco's Westfield Shopping Center has installed a 50 ft crystal-encrusted inverted Christmas tree, left, in its rotunda, a reprisal of the tree's debut in 2016, which proved an Instagram sensation. 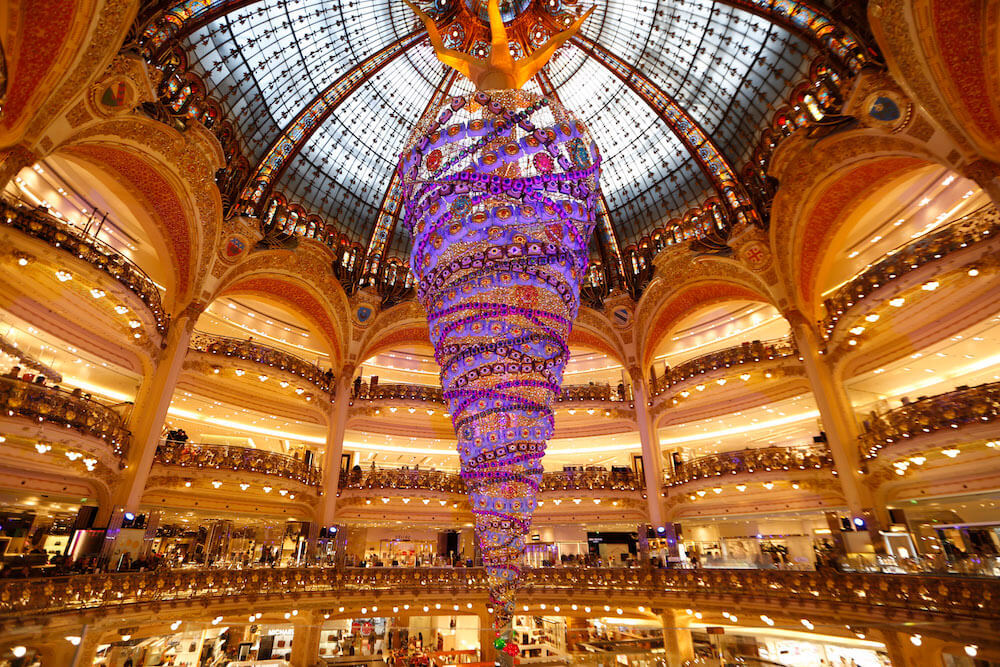 The modern design world embraces unconventional Christmas tree displays, and the Modern Christmas Tree patented by Matt Bliss is an inspired, if conventionally erect, example. Designed by Bliss's grandfather, Lawrence ‘Bud’ Stoecker in the 1960s, the tree's A-frame arrangement of acrylic concentric circles presentes a stylized, perfectly symmetrical Christmas tree profile that's particularly suited to Mid Century modern architecture—like Pierre Koenig's Stahl House. “The tree was originally made of cardboard, then Masonite board before he finally settled on Plexiglas,” explains Bliss, who patented his grandfather’s invention in 2011. Available at 2Modern > 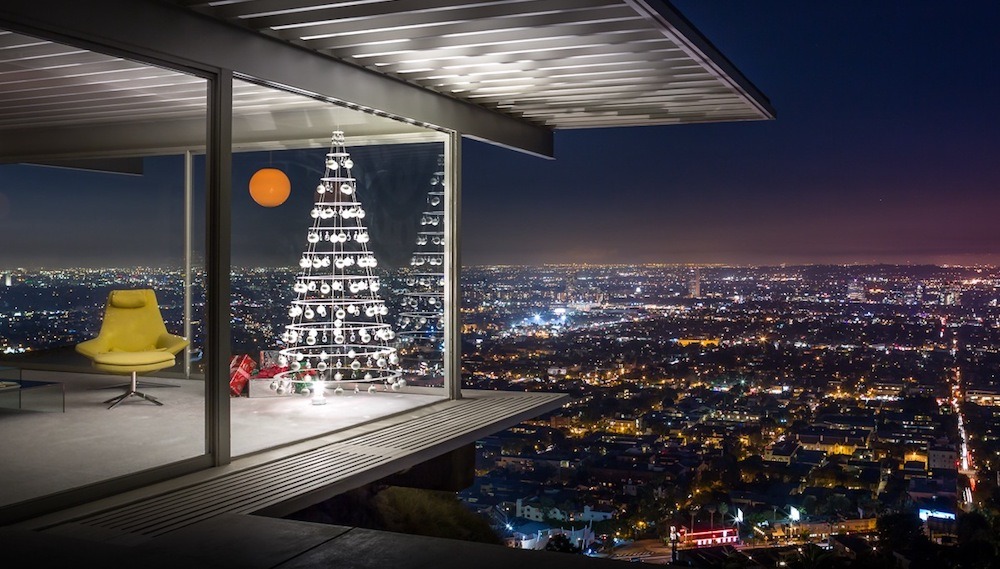 2021 Interior Design Trends That Inspire Us

The experts have weighed in on the interior design trends slated to take over this year — and, na... read more ➞

Hygge: The Danish Guide To Comfort

Redefine the comforts of home with Hygge: the ever-evolving Dansk concept which prompts us to see... read more ➞