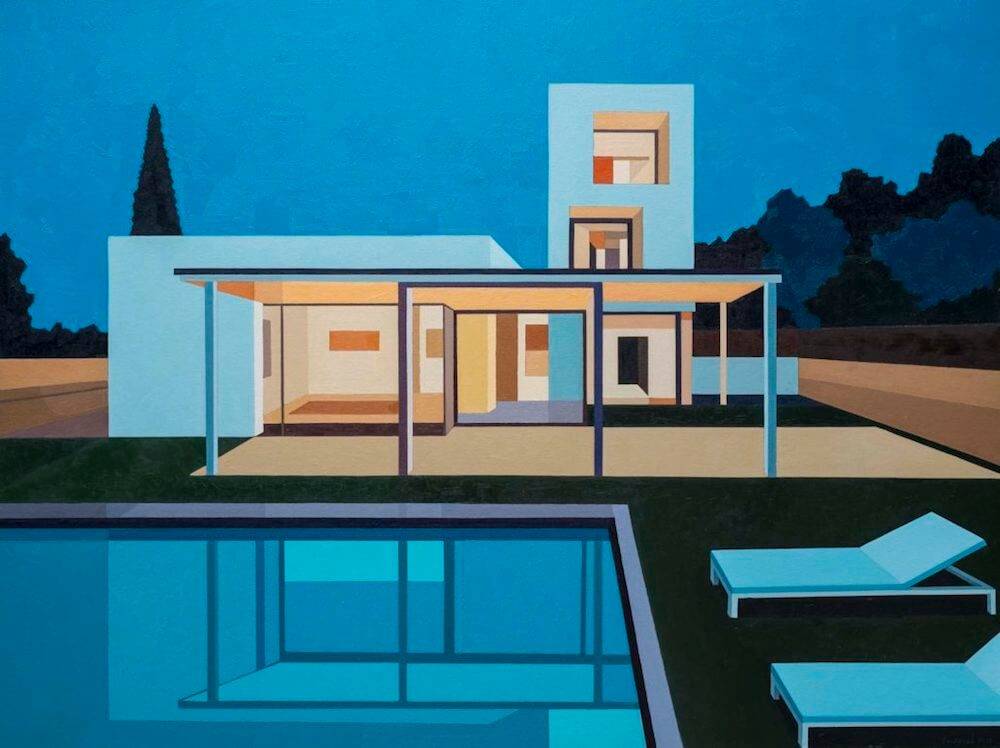 Modernist architecture is the subject of a current exhibit at the Tucson Museum of Art, comprising 6 oil paintings by the British artist, Andy Burgess.

In 2016, The New York Times published a now-infamous article with the headline, 'Why Won't Mid Century Design Die?'—a blunt, exasperated reference to the stronghold that the era's lauded aesthetic continues to have on today's design cognoscenti. The answer, of course, lies within the question itself. Nearly three-quarters of a century after architects and builders with names like Neutra and Koenig, Wexler and Eichler began dotting the southern California landscape with flat-roofed, glass-fronted houses, the Mid Century Modern era remains as golden and promising as the California sun—irresistible fodder for luscious coffee table books and breathless blog posts, impossibly sleek modern furniture and sold-out design festivals. With no subsequent design movement having remotely managed a commensurate feat, the more salient question may be: if Mid Century design dies, what, exactly, will take its place?

Artists, like Andy Burgess, the subject of Mid Century Perspectives: Paintings by Andy Burgess, currently on view at the Tucson Museum of Art, provide ample evidence as to why modernism remains an alluring attraction to creatives working in disciplines as disparate as painting, industrial design, and architecture. A British artist who escaped the brooding skies of London for the eternal sunshine of Tucson Arizona, Burgess has committed the last decade to exploring the formal elements—line, shape, light, shadow—that challenge most artists, and which are intrinsic to the modernist typology. Whether informed by a first-person encounter, or via photographs—the architectural photographer Julius Shulman is an obvious influence—Burgess renders in paint the kind of precise, geometrically refined compositions of domestic idyll that fill the Instagram streams of architecture buffs making annual pilgrimages through the scorching deserts of Palm Springs or the hairpin bends of the Hollywood Hills.

Burgess' paintings are two-dimensional expressions of what lies at the heart of modernism and its allure: its legibility and visual clarity. Like modern architecture's desire to erase the line between inside and outside, a Burgess composition blurs the line between illustration and abstraction. A series of horizontal rules and flat color fields may converge to form the sun-drenched, see-through exterior of a Modern house as seamlessly as as it mimics the geometric tapestry of a modern painting.

“In some senses this project is a labor of love to record my own encyclopedia of early modern buildings and their designers," explains the artist. "Despite the huge impact of early modern architecture, the innovative and subtle minimalist buildings that I am researching... never became the dominant mode of twentieth century building. We have continued to build the vast majority of houses in a traditional and conservative idiom, so that these great examples of modern architecture...are still shocking and surprising today in their boldness and modernity...”

Which is, one suspects, the reason that Mid Century design won't die. 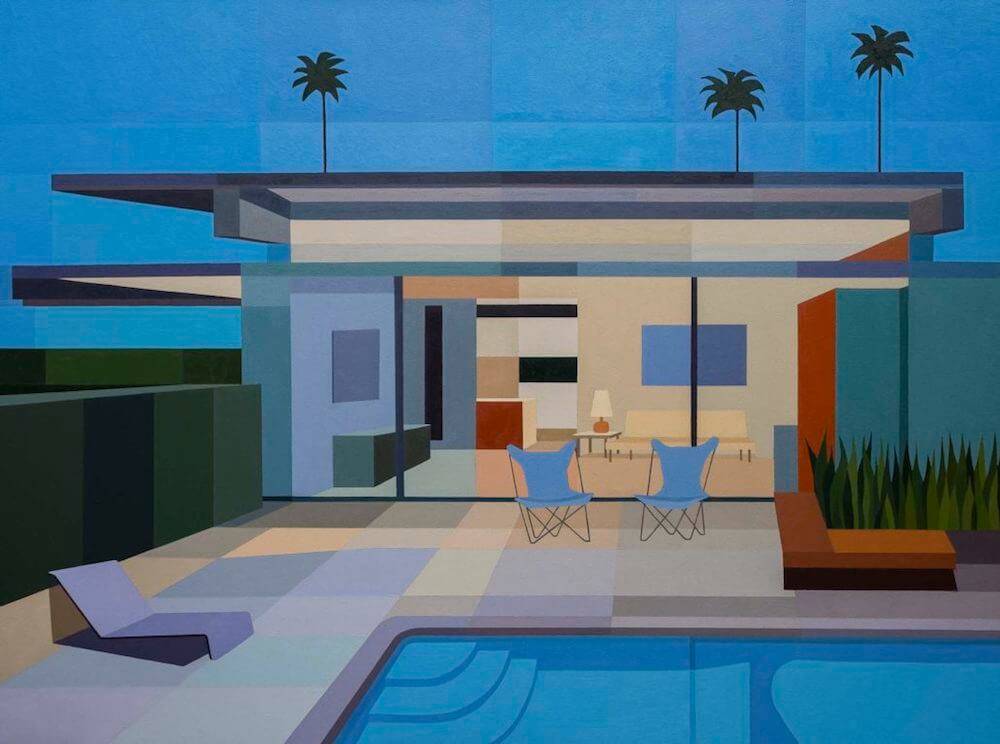 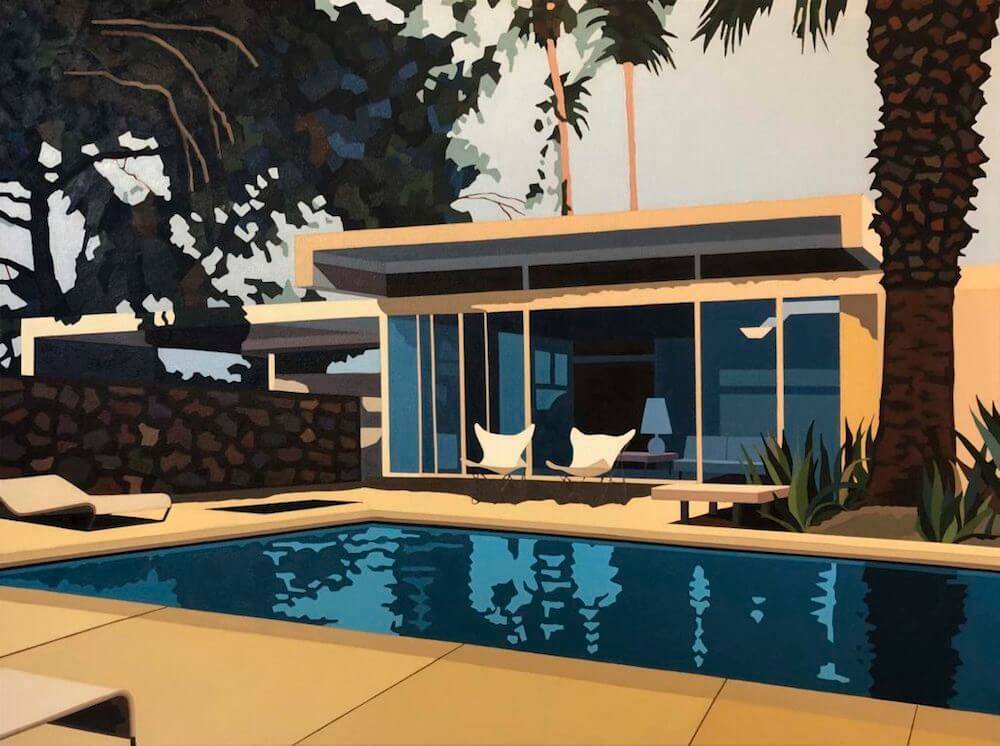 An Andy Burgess Mid Century composition, featuring furniture as iconic as the architecture.

Nearly three-quarters of a century after names like Neutra, and Koenig, Wexler and Eichler began dotting the southern California landscape with flat-roofed, glass-fronted houses, the Mid Century Modern era remains as golden and promising as the California sun. 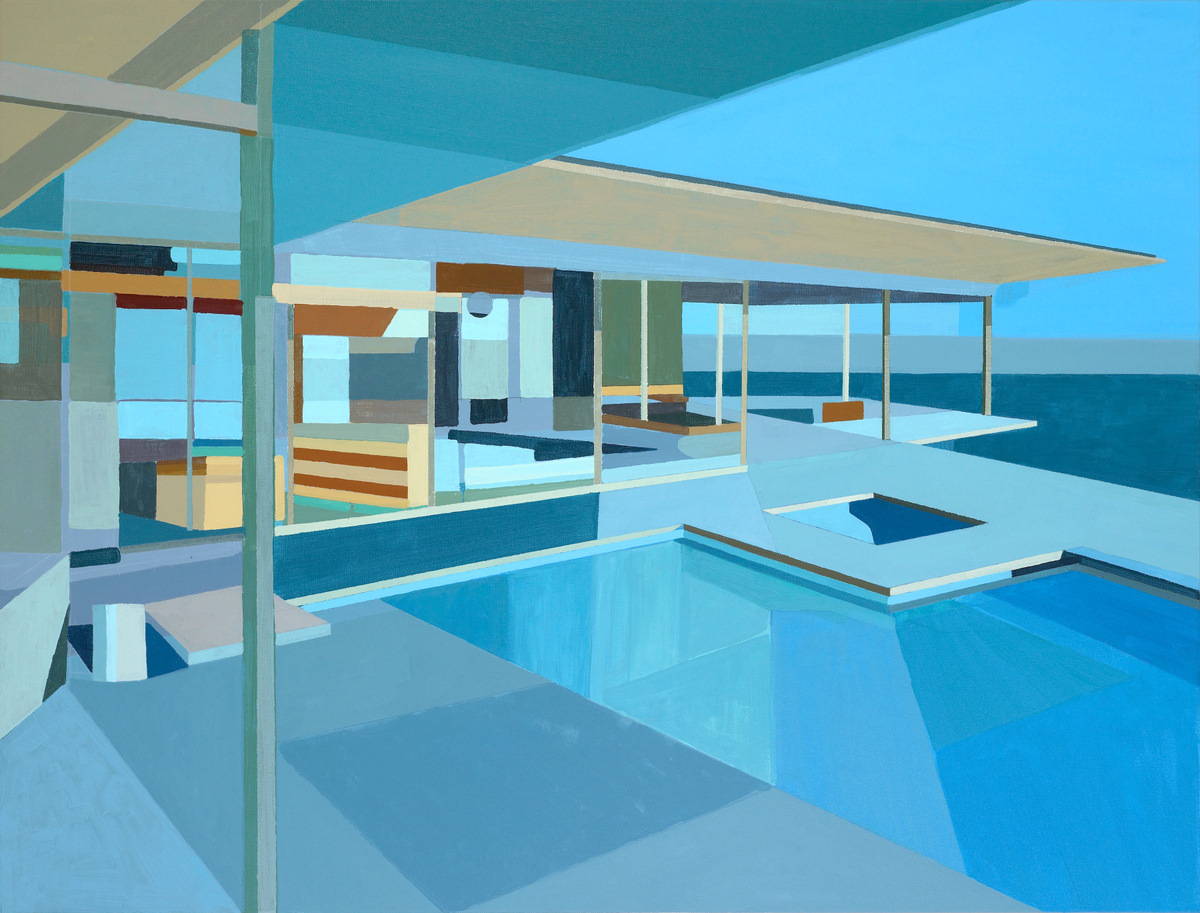 The instantly recognizable profile of Pierre Koenig's Stahl House is one of many landmark modern houses that Andy Burgess has committed to canvas.

The TWA Hotel: A Glorious Escape In An Age of Inelegance
TWA Hotel, an exquisitely appointed, 512-room revelation— appended to a Mid Century masterwork, ravishingly restored and refurbished—is equal parts exhilarating journey into a glamorous past...
Read more