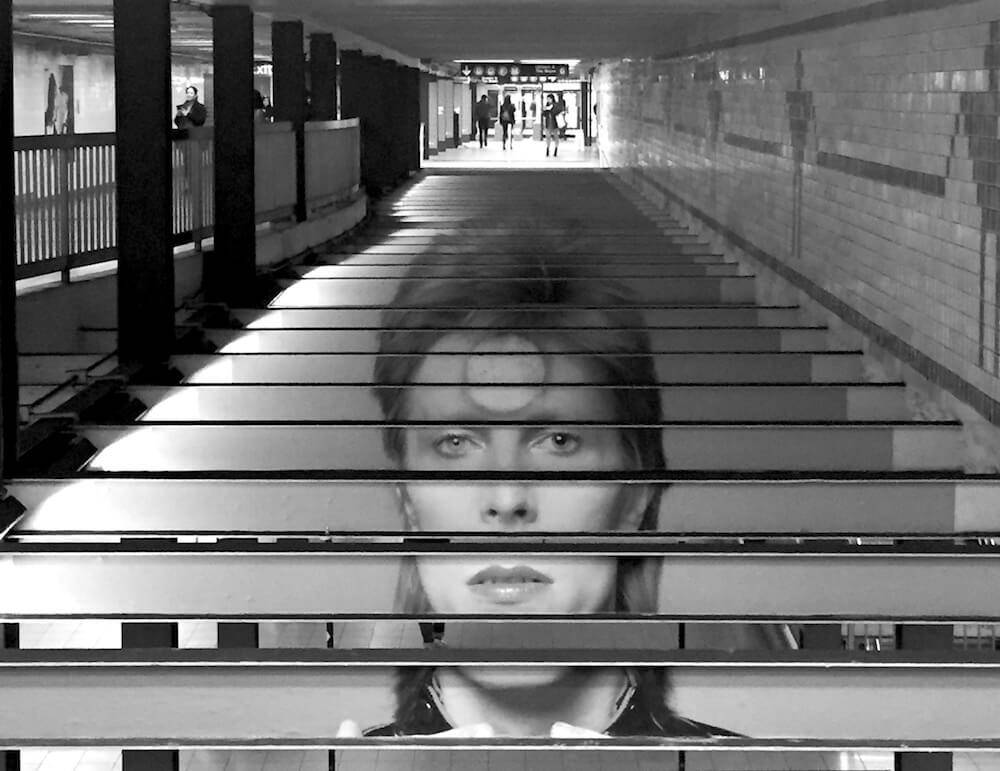 David Bowie is Here, a tribute to the late singer, is located in the Manhattan subway station that he frequented during the last two decades of his life.

David Bowie's death 2 years ago was a seismic moment in music and culture, but in his New York City neighborhood, it was a deeply personal loss. Having made Manhattan his home for the last 2 decades of his life, Bowie, an Englishman, was amongst those outlandishly famous people who managed to somehow walk the streets of this American city freely, sans bodyguards and disguises, participating in the downtown pleasures available to ordinary New Yorkers—the uneven cobblestone streets of Soho and the wide open vistas of Washington Square Park—while, no doubt, rueing its less scintillating indignities—like perennially dirty, jam-packed subway stops.

Which is precisely what makes David Bowie is Here, an inspired, intimate underground installation at Bowie's once frequented subway stop, a soulful piece of ephemeral art. As most Manhattanites know, the real David Bowie event is happening in Brooklyn. There, at the Brooklyn Museum of Art, David Bowie Is, a major retrospective composed of archival material—personal objects, costumes, handwritten lyrics, music videos—organized by London's V&A Museum, is shaping up to be New York's cultural event of the year, never mind the season. At the Broadway-Lafayette subway stop, though, the David Bowie being feted isn't the global superstar, born and raised across the Atlantic, currently being lavishly celebrated across the East River. Here, underground and across grimy walls and worn turnstiles, resides the local David Bowie, the downtown New Yorker, who chose to live—and die—in an apartment around the block.

Organized in concert with the Brooklyn Museum's retrospective, this satellite show is the brainchild of Spotify, which has made ingenious use of the generous subterranean real estate available at this subway station, decorating the walls, pillars, turnstile entrances, and, most compellingly, the exposed iron beams between the station's 2 floors, with images of Bowie from every period of his career. Quotes by the singer, in which he articulates his feelings about New York, and a neighborhood map of his favorite haunts, complete a picture of an artist and the city which figured prominently in his career and life: concerts performed, albums recorded, plays authored, and a domestic life lived with his wife and daughter—a city which, towards the end of his life, he rarely left.

David Bowie, an Englishman, was amongst those impossibly famous people who managed to somehow walk the streets of this American city freely, sans bodyguards and disguises.

David Bowie is Here, like most things in NYC, is a fleeting experience, remaining on view through May 13th, a mere four weeks after its opening. But New Yorkers interested in a more lasting memento can purchase subway MetroCards emblazoned with the singer's face. A suite of 5 cards, each bearing a different Bowie visage, is on sale only at the Broadway-Lafayette station, in a limited edition of 250,000, immortalizing both David Bowie is Here—and a time, not long ago, when David Bowie was still here. 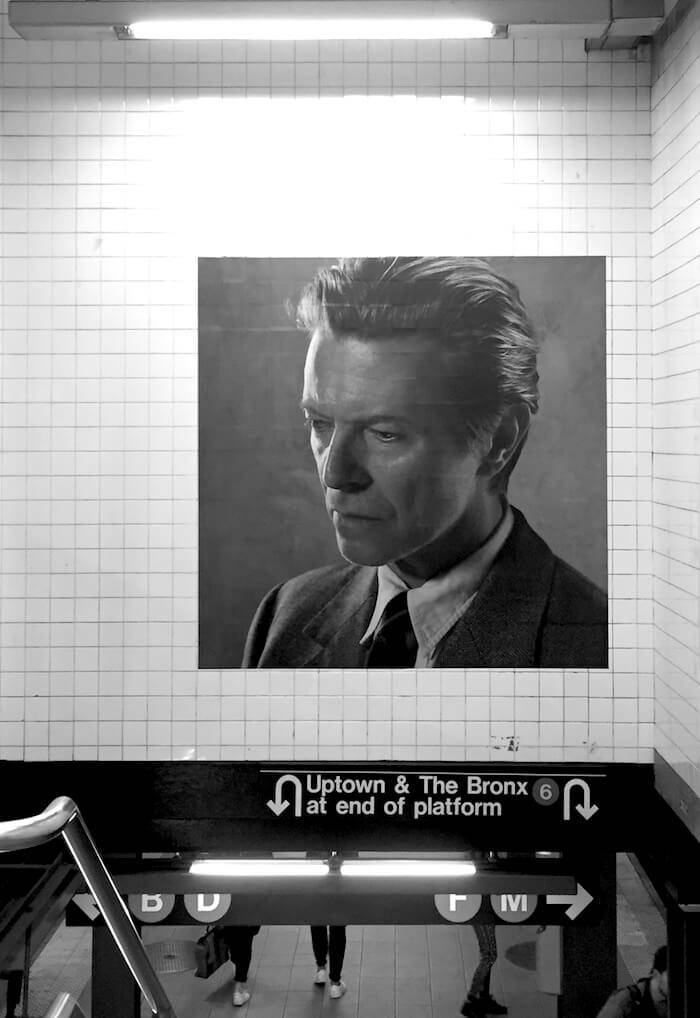 A photo of David Bowie in his later years, hangs above stairs leading to the subway platform. 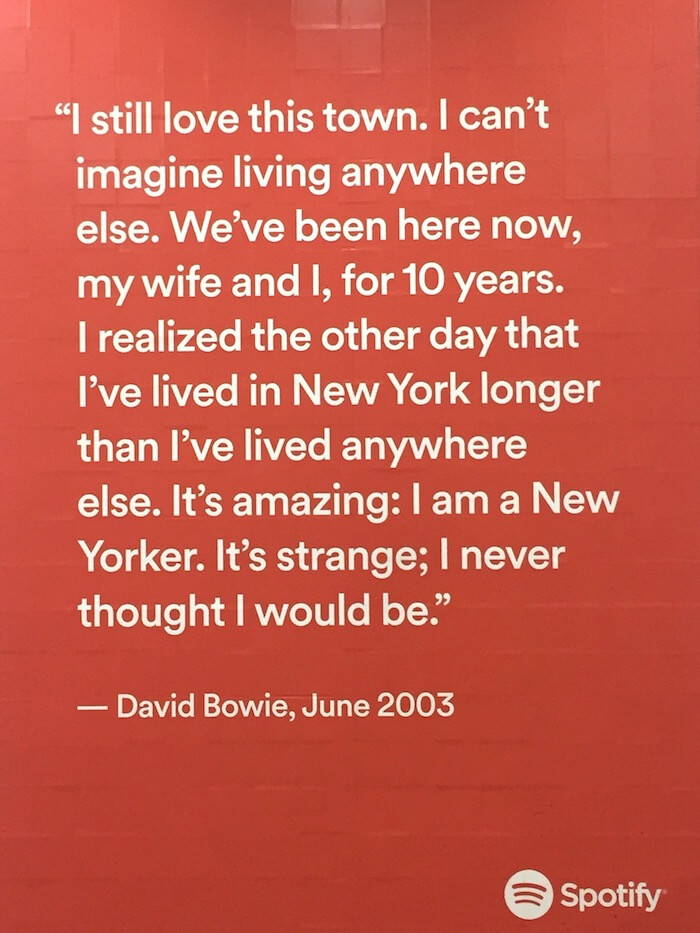 Quotes from Bowie's interviews, referencing NYC, are woven through the exhibit. 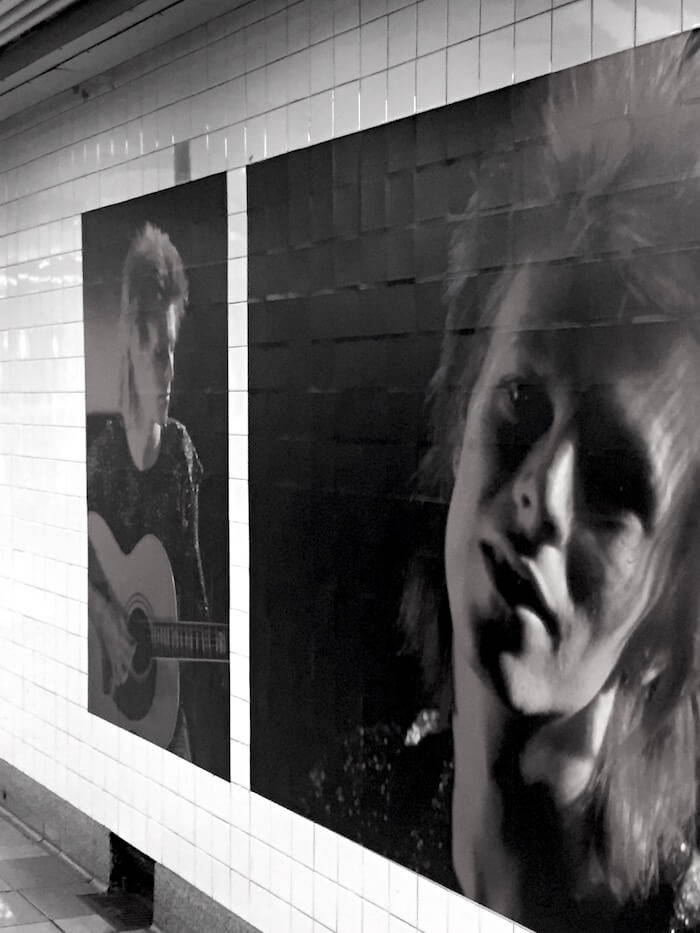 An underground passageway, bearing images of a young David Bowie.

At the Broadway-Lafayette subway stop, the David Bowie being feted isn't the global superstar, born and raised across the Atlantic, currently being lavishly celebrated across the East River. Here, underground, and across grimy walls and worn turnstiles, resides the local David Bowie, the downtown New Yorker, who chose to live—and die—in an apartment around the block. 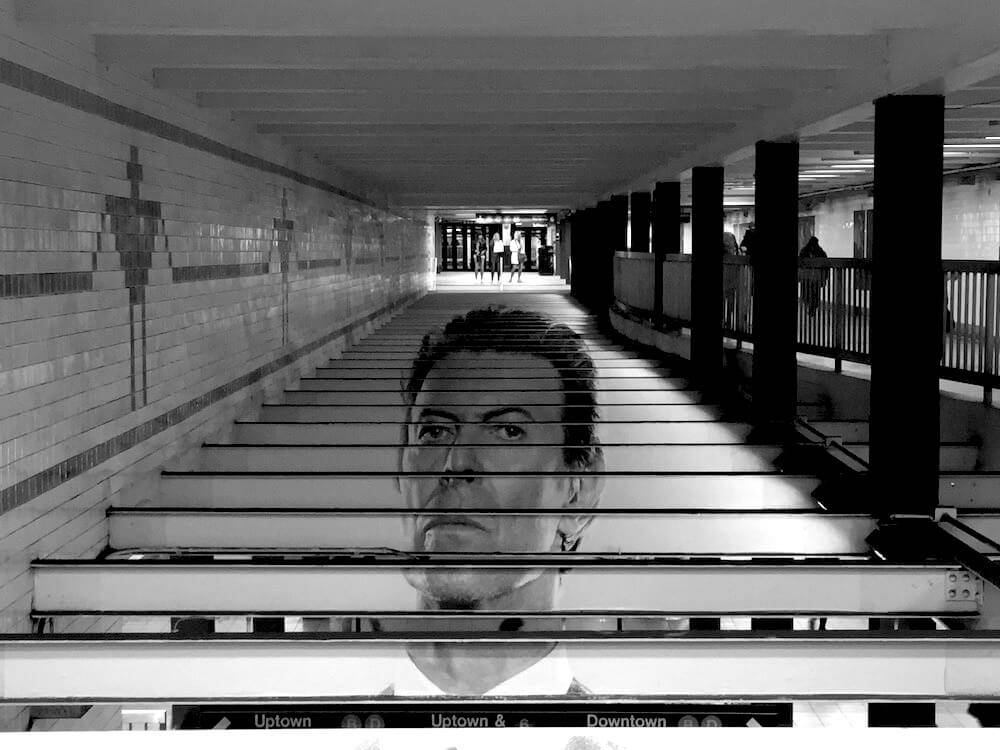 Steel beams in the Broadway-Lafayette NYC subway station, bearing the image of David Bowie, part of the installation, David Bowie is Here.